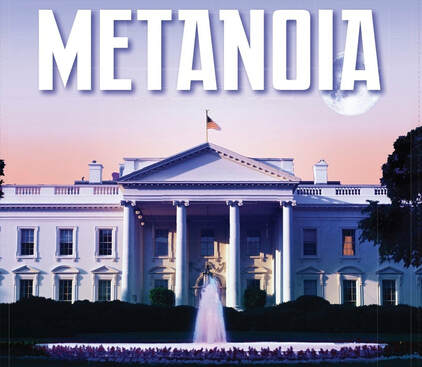 ​One woman's vision challenges traditional masculine values and tactics.
​
In a battle for the U.S. presidency, the candidacy of a charismatic leader, Claire Alden, threatens the status quo. The famous Nobel Peace Prize winner, who originally won global fame for a cooking show, runs on a campaign platform to stop the deployment of a laser weapon in Earth orbit and to create a cabinet level Department of Peace and Nonviolence. A devastating betrayal robs Claire of trusted advisors; the man she looks to for love and support may not deserve her trust; and a mysterious rose-sender plots her death, all combining to hold the nation in the grip of profound suspense on Election Day.
Table of Contents
Chapters 1 - 4 are included in full on this website
The entire book is available as a softcover book or Kindle download at Amazon.com

A classic struggle of Venus and Mars

​"A three-dimensional thriller. Fast pace, strong characters, and a plot both deep and rich. Not to be missed."
​~ Mark A. Clements, Geisel-Award Winning Author The Land of Nod

​"Judith Hand has created a gripping thriller and an intriguing love story. Claire Alden, meets her match in Savik Kodaly, a complex antagonist who may not buy into Claire's vision for a less violent future. Assassin's Rose grabs the reader from the first page and moves smoothly through unexpected twists to an astonishing climax."
​~ Candace Toft, Author of The Trap

​Judith Hand is the published author of several novels.  In 2004, Silhouette showcased the first of a series of her women’s action/adventures, Code Name: Dove, to launch their new line called “Bombshell.’  All ‘Bombshell’ books featured strong women, and Code Name: Dove made the Waldenbooks Best-seller list.

​Her historical epic Voice of the Goddess, a love story about a Bronze Age heroine, won numerous awards, and her second epic historical, The Amazon and the Warrior, also won several book awards and was published by TOR/FORGE.

Dr. Hand has made the transition from left-brained scientist to right-brained novelist and screenwriter. Before she began writing fiction she taught Animal Behavior and Ornithology in the U.C.L.A. Biology Department. Her non-fiction work over many years has focused on the subjects of war and peace and the empowerment of women, most notably the 2014 book Shift: The Beginning of War, The Ending of War and her 2019 collection of interconnected essays on the potential for humans to create and maintain a warless future, A Future Without War. The Strategy of a Warfare Transition, 2nd Ed.
Buy Online