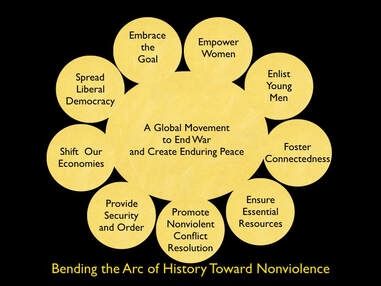 In “Life Without War,” the anthropologist Douglas Fry explores how to move the global community beyond war by comparing characteristics of three actual peace systems on different continents: (Fry 2012)

ten tribes of the Upper Xingu River basin of Brazil,
the Iroquois Confederacy of upper New York State, and
the European Union.

Fry points out that some people with peace systems renounce all war, but these particular people did engage in armed conflicts with people outside of their union. Within their union, however, they developed attitudes and institutions that allowed them to live in peace. His comparison leads him to suggest six essentials of a successful peace system:

In his discussion of “overarching social identity” he takes on the question of “us-versus-them” mentality that can foster conflicts and willingness to use violence against the “other.” He describes the methods used by these three peace systems to “expand the us” to encompass a sense of common identity, and the methods are unique to each setting. This corresponds to the work done and the programs and institutions embraced by the cornerstone “Foster Connectedness” in the ending war project I have developed over nearly two decades, A Future Without War (AFWW).  The text of my book by that same title is posted on this website. As we proceed I will provides links to its relevant chapters.

The figure presents the 9 Cornerstones of the AFWW project. Brief descriptions of their importance to any ending-war campaign are found in the Appendix. To the right side,   AFWW's "Foster Connectedness" cornerstone embraces some of the concepts of Fry's discussion of developing an overarching social identity.

Addressing “intergroup ties,” or interconnections among subgroups, he points out that intergroup bonds of friendship and kinship discourage violence. He describes how peace systems use ceremonial unions, fictive and genuine intermarriages that establishes a sense of kinship, economic partnerships, and personal friendships to create such ties. To repeat, these practices are ones that are also the focus of many organizations and programs embraced by the AFWW “Foster Connectedness” cornerstone.

“Interdependence” in Fry’s paper refers primarily to economic interdependence and its power to promote cooperation. It includes, however, engaging in cooperation for any kinds of beneficial reasons. For example, in the dry desert of Australia’s west, local groups reciprocally allow other groups access to water and food in lean times, because a time will come when they may be the needy ones. Peace systems also tend to specialize in production of trade goods that they exchange, again creating interdependence. Organizations and projects embraced by the AFWW cornerstone “Shift Our Economies,” to the left in the figure above, would also be stressing the strategic importance and potential power of creating this kind of interdependence, something that is already occurring.

Fry begins his discussion of “nonwarring values” by pointing out the obvious fact that some value orientations are more conducive to peace than others, and that peace systems live by “nonwarring values.” In the Upper Xingu tribes, for example, the warrior role is shunned, peace is considered moral, war is not. Fry describes the means by which peace-promoting values were enshrined by the Iroquois Confederation. An explicit goal for the European Union was to bring peace and prosperity to the region. In the case of the EU, Fry describes how actualization of the values of democracy, social equality, human rights and respect for the law serve as the EU’s shared moral compass. The AFWW cornerstone “Spread Liberal Democracy” also places emphasis on the pacifying effect of these facets of liberal democracies when you have large, modern societies. The AFWW cornerstone “Promote Nonviolent Conflict Resolution” embraces the need to teach the philosophy and skills of peace.​
Fry illustrates a need for “symbolism and ceremonies that reinforce peace” citing participation of all the Upper Xingu tribes in ceremonies to mourn the deaths of deceased chiefs and inaugurate new ones. Joint ceremonies help unify the tribes, again helping to foster connectedness and create a sense of common identity.

The Iroquois League was unified by a powerful symbol of unity, the Tree of Peace.  The tree’s white roots represented the desire for peace to spread beyond the confederacy. Clearly the Iroquois understood that peace requires work to maintain it; an eagle perched on top of the tree was to act as a reminder that the tribes must remain vigilant to the threats to peace from within and without. An ending-war campaign, built around the shared goal of creating safe, secure, and healthy places for all children, a better future for all, will likewise need to create an appropriate, unifying symbol or symbols to represent the desire to forge and maintain such a peace.
​
If a life without war is to be won and maintained, there must be “superordinate institutions for conflict management.” Fry points out that there are many different ways to address conflicts between groups, and that one key to managing them is to create higher levels of governance to facilitate these processes by creating a new common identity and a new unity of purpose. He describes the Council of Chiefs created by the Iroquois Confederacy. He describes higher levels of governance created by the EU, such as the European Court of Justice. The formation of the United States from thirteen separate colonies created that kind of higher level of governance under a constitution in which people with differences do not take up weapons and battle it out but instead go to court. In extreme cases, they appeal to their Supreme Court. Organizations, individuals, and programs embraced by the AFWW cornerstones “Provide Security and Order” and “Promote Nonviolent Conflict Resolution” are concerned with these issues of how to nonviolently manage conflicts. The United Nations is arguably the best candidate positioned to serve as a superordinate institution for a global peace system. The International Court of Justice is another step we have already taken in this direction.

Fry concludes that creating a peace system for the entire planet would involve many synergistic elements “including the transformative vision that a new peace-based global system is in fact possible….” Here the commonality with getting the very concept widely understood that it is possible to create such a peace system is with the AFWW cornerstone “Embrace the Goal.”
​
Summing up, if we decide to pursue the goal of a warless future, we have actual examples and models to learn from, and they encourage us to know that with sufficient will we can succeed.
C10 - AFWW - A Future Without War - Nine Cornerstones
Return to Table of Contents
Fry, Douglas P. 2012. Life without war. Science 336:879-884.