In addition to her books and novels, Dr. Hand has also contributed a number of articles and essays to various research areas. Browse articles.

In 2006, in the first edition of A Future Without War: The Strategy of a Warfare Transition, evolutionary biologist Judith Hand collected together interrelated short essays found on her website AFutureWithoutWar.org (afww.org) that taken together explore the potential for humans to create and maintain a warless future. The 2019 second edition of A Future Without War updates those essays and adds several more. This is a must-read, unique explanation for why we make war, why and how the relationship of men and women to war differs, the roles men and women must play as equal partners in any effort to end war, and the scope of social and political changes that would have to be made if we are to create a future without war and maintain it. Two diametrically opposite forms of governing—patriarchy and liberal democracy—are described, pointing out that they are now in a titanic struggle for supremacy.  The full text is available free online here.  Purchase A Kindle version or a paperback version that includes an Index here.

​Making war is not an inevitable, inescapable result of human nature. Evolutionary biologist Judith Hand explores, from both a biological and anthropological perspective, why we can be sure that war is not something that is “in our genes.” She also uses parental investment theory and the biological phenomenon of sexual dimorphism to explain why any attempt to end war must include the empowerment of women. War and Sex and Human Destiny further describes two radical social changes needed to create a global peace system, thereby freeing human and financial resources needed to pursue a global peace and also maintain it. Finally, with respect to human destiny, it addresses the titanic struggle now occurring between two titans of human governing: patriarchy vs. liberal democracy. The full text is available free online here.  Purchase a Kindle version or a paperback version that includes an index here. 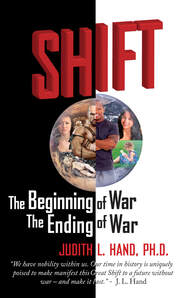 Shift is about a subject of profound importance to every person on Earth, and arguably pivotal to the survival of our cultures or even our species—war. Can we end war? If we could and wanted to, what would be required of us? Are men alone responsible for war; what is the role of women? Providing answers to these questions is the heart of Shift.
The book’s material is divided into two intimately connected halves: The logic of this division is that unless we understand why we make war, it will not be possible to devise an action plan to end it.  Learn more.

​Dr. Hand has written several non-fiction books, all focused on the subject of war. Women, Power, and the Biology of Peace, published in 2003, was the first. In it she explained for the first time her social stability hypothesis for why women, not as individuals but considered as a group, differ significantly from men in ways that relate to war and to the potential for ending war. These differences, she argues, go deeper than culture. Learn more. 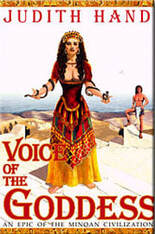