Voice of the Goddess 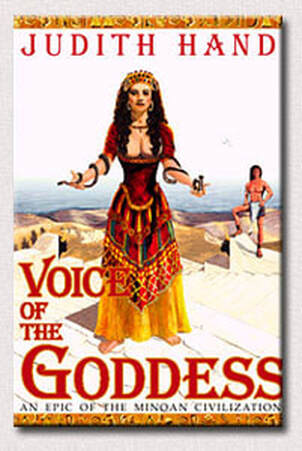 An epic story of devotion, betrayal, pride, grandeur, and the enduring power of love. Leesandra of Keftiu is born on Crete into a society devoted to the worship of the Great Goddess. From youth we follow her and the man who will become her lover, Alektrion of Kalliste, until they enter into the final struggle to preserve their peace-loving way of life from the brutal encroachment of mainland foes bent on their subjugation. Into this primal mix of passion and war is added the historical 1628 BCE volcanic explosion of the nearby island of Santorini (Thera), a staggering natural catastrophe.
A remarkable book! A moving love story. In a unique and beautifully imagined setting the recreates the ancient Goddess culture of Crete, but something more besides--and unusual look at the dual nature of humanity and the warring forces that form our soul.  Diana Gabladon, Author of the Outlander series.

Superb historical drama! The first novel ever to bring readers into the utterly alien reality of the Minoan world...I wasn't able to put the book down. For me it was right up there with James Michner's The Source.  Judith Hand allows us actually to taste and feel a lost world whose people were already dust and myth when Plato and Athens were young. With such grace does she lead us into the last days of Kalliste, permitting us to experience the origins of the legend that came down to us as Plato's Atlantis.  Charles Pellegrino, Author of Unearthing Atlantis.