War and Sex and Human Destiny
War is not an inescapable result of human nature! In this book, evolutionary biologist Judith Hand explorers the subject of war from both a biological and anthropological perspective to explain why we can be sure that war is not something that is “in our genes.” She also uses the biological phenomenon called sexual dimorphism to explain why any attempt to end war that will endure must including the empowerment of women. See “Sexual Dimorphism” for excerpts on that subject. Dr. Hand further describes two radical social changes in our behavior and priorities needed to create a global peace system, thereby freeing human and financial resources needed to pursue a global peace….and maintain it. Learn more. 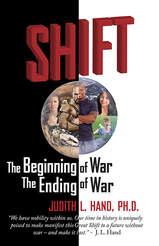 Shift: The Beginning of War the Ending of War
This is a book that takes belief in the inevitability of war apart.
What if someone could convince you that we actually have the power to permanently end war? What if someone could convince you that once we resolve to make that happen, we could free ourselves from war in two generations or less?” With those words, evolutionary biologist Judith Hand opens her exploration of why we make war, when we started making war, and why and how we can, if we choose, move forward into a future without war. In accessible, clear language, Hand marshals knowledge and insight from biological, cultural, and political sciences to persuasively make her case. The depth and breadth of knowledge covered makes it essential reading for anyone interested in war and peace. The notion that we might actually be able to abolish war may seem—may in fact be—utopian, but Dr. Hand explains why and how this achievement is possible. Shift: The Beginning of War, The Ending of War demonstrates that the current century blesses us with a rare but narrowing opportunity to achieve what generations before us could not. As one reader wrote: “Judith Hand invites each and every one of us who cares about the future of the human family to take part in this historical psychological, social, and institutional shift toward resolving differences through law with justice instead of bullets and bombs. Learn more at afww.org.

"I hold deep admiration for the great pioneering work of Dr. Judith Hand for a world without war which is possible when people believe passionately and work for it. Shift explains 'Why' and 'How'."
~ Mairead Maguire, Nobel Peace Laureate

"Judith Hand marshals knowledge and insight from biological, cultural, and political sciences to argue persuasively that now is the time in human development to extinguish the fires of war. She demonstrates that such a mammoth shift of human spirit and politics is possible, in fact crucial to human survival…she invites us to take part in this historical psychological, social, and institutional shift toward resolving differences through law with justice instead of bullets and bombs."
~ Douglas P. Fry, Ph.D., Director of Peace, Mediation and Conflict Research
Åbo Akademi, University in Vasa, Finland. Author of Beyond War: The Human Potential for Peace 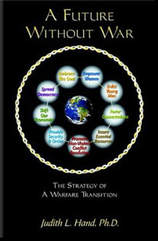 A Future Without War
In readily accessible language, evolutionary biologist Dr. Judith L. Hand explores, from a biological perspective, the root causes of war and explains why war is not an inescapable facet of human nature. Drawing upon diverse fields from biology to anthropology to psychology, the author outlines a coherent strategy to end war, setting such a campaign in its historical context and explaining why a great paradigm shift in conflict resolution, from economies based on war to economies based on ending war, could occur within a relatively short period of time. This book is a collection of the core essays on this website. It's a book to be read, savored, and shared with anyone wanting to help create a better world. Learn more. 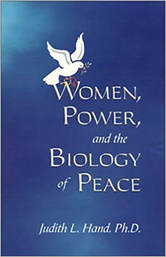 Women, Power, and the Biology of Peace
​It is often said that we will always have wars because making war is in our nature-it's genetic and inescapable. Arguing from biology, using illustrations from anthropology, Dr. Hand builds a convincing case in straightforward language accessible to laypeople that we aren't doomed to warfare. And she explains what it will take to free us.
Published in 2003 by Questpath Publishing | Hardcover ISBN# 0-9700031-5-3 | Softcover ISBN# 9-9700031-6-1
​Available online

"In Women, Power, and the Biology of Peace, author Judith Hand (an expert in the field of Animal Behavior and Evolutionary Biology) addresses the biological basis of war and describe necessary steps needed to achieve lasting peace. Emphasizing the crucial role women must play in partnership with men to make the dream of a peaceful future into reality, Women, Power, and the Biology of Peace is an uplifting message advocating positive change for a truly better world. A work of vision grounded in science and human behavior as surely as noble ideals."
​~ Midwest Review of Books, October, 2004

"Give peace a chance. Here is a book where you can find out how. Women, Power, and the Biology of Peace is possibly the most important book on paradigm change you will ever read."
​~ Patricia Baird, Ph.D., Professor, Dept. Biol. Sciences at California State University, Long Beach